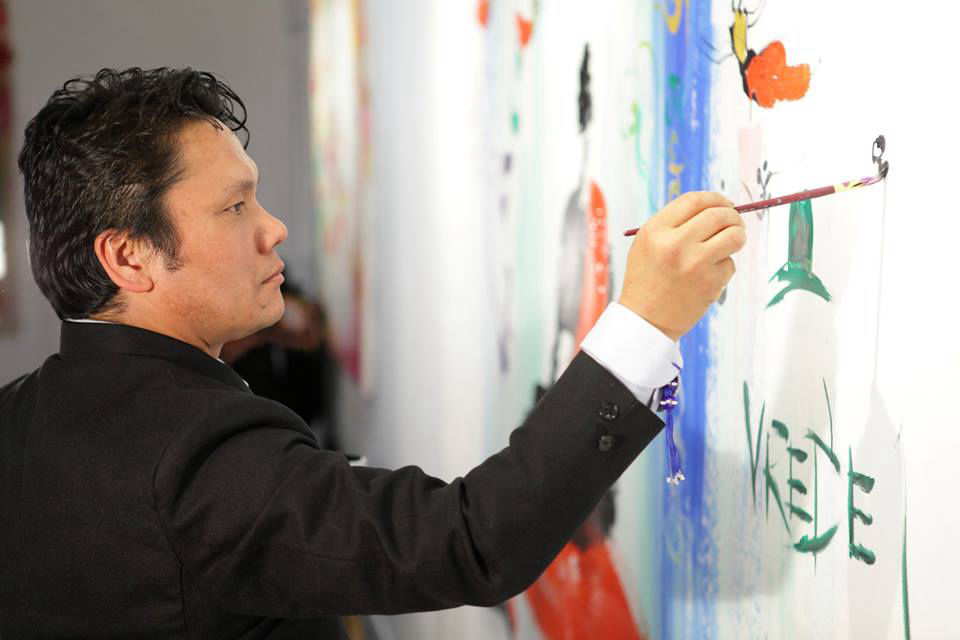 Who is Tashi Norbu

Tashi Norbu is an independent -Tibetan born- contemporary Artist with the Belgian citizenship who lives and works in the town of Emmen, The Netherland.

Tashi is educated as a traditional Tibetan Thangka Painter and he worked in Dharamsala, India. He completed his art studies in the west at the Saint Lucas Academy of Visual Arts in Ghent, Belgium. 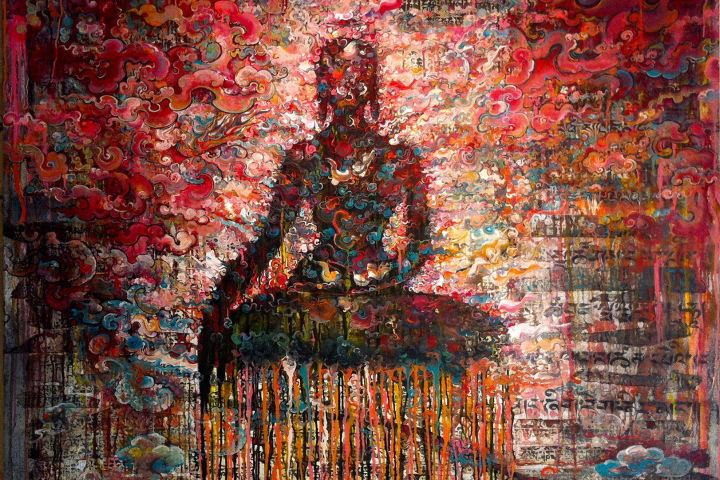 The Art of Tashi Norbu shows the fundamentals/basics of his background -Tibet and Buddhism- combined with strong influences from western Art forms, western ideas and modern time icons. Nowadays he is considered as a visual Artist giving live painting performances around the world along with Tibetan rituals establishing “The Tibetan Mantra Lounge” accompanying him during his Live Painting. 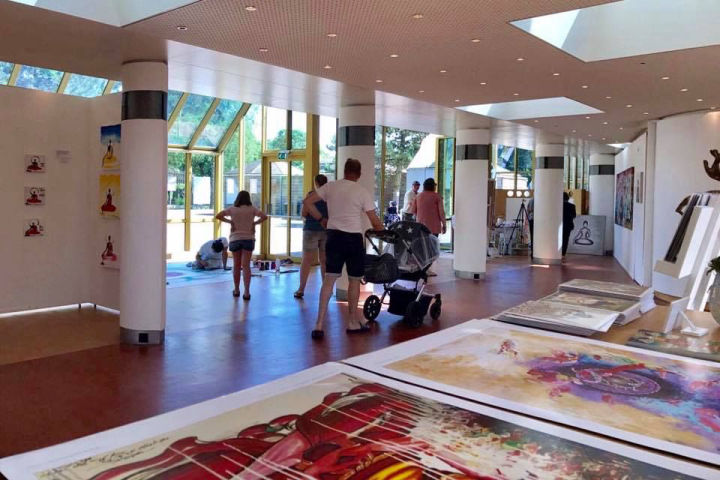 Tashi Norbu is also the Chief Executive Director at Museum of Contemporary Tibetan Art in the town of Emmen, The Netherland.

There on 1st June 2017 he established the Museum of Contemporary Tibetan Art under the support of the Municipality of Emmen.
The Museum is officially included in the list of the Museum of the Netherlands. 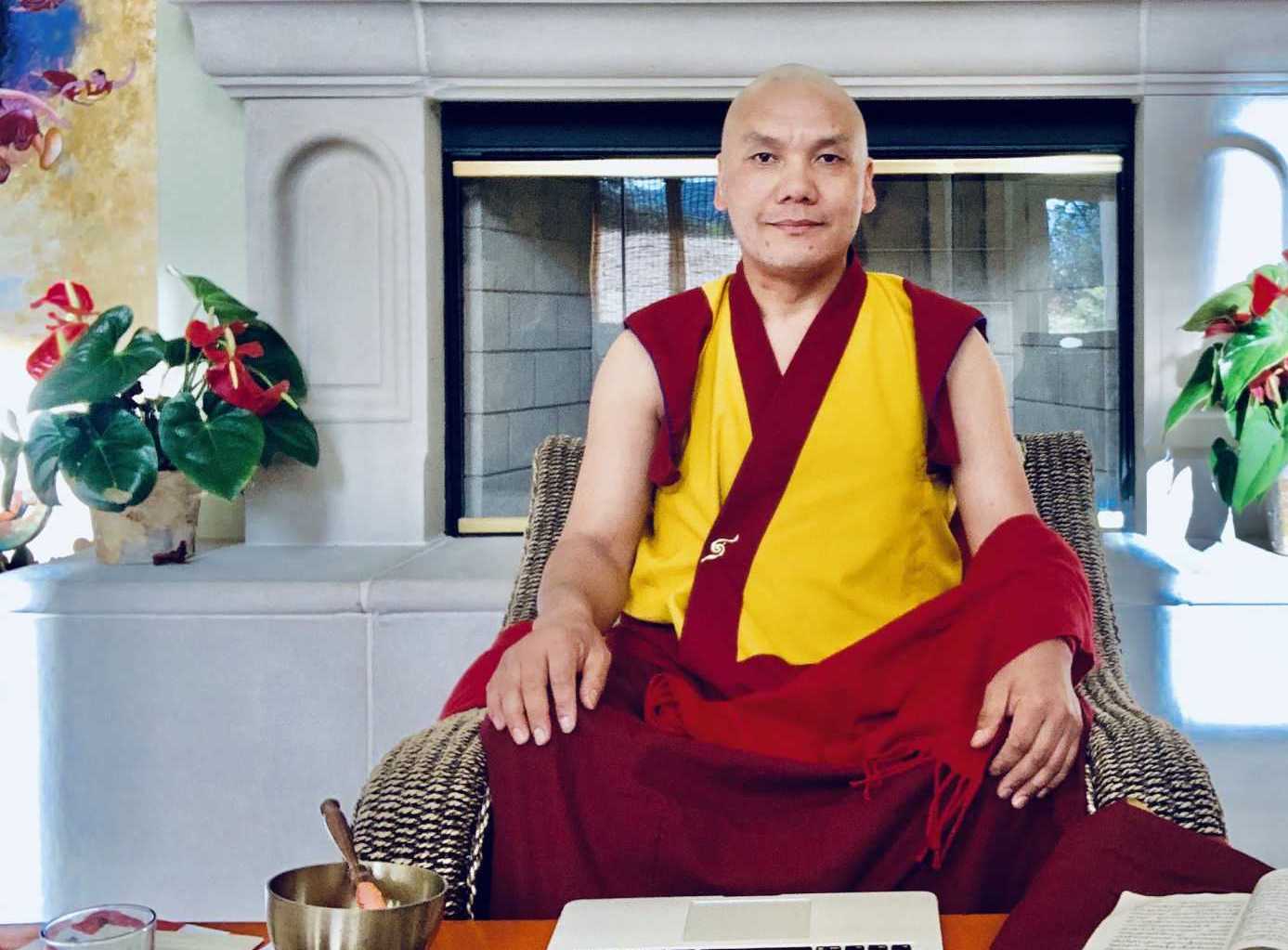 My name was given by Namkhai Nyingpo Rinpoche who was my master and is considered to be a Flying Monk. I am inspired by my master Rinpoche, when I paint the Sky Dancers or the Flying Monks and Nuns. These are my “Time Travelers” depicted on my paintings. I was ordinated as a Thangha Painter, by the previous reincarnation of Bokar Rinpoche. My intuition deeply inside me, was that one day later in the years I would become a monk engaging myself into the path taught by the Buddha, meditating and putting his words into practice. Being so familiar with this idea, since -as the eldest son of the family-, I had to accompany my two younger brothers at their age of 8, into monastic life in Monasteries of India”. 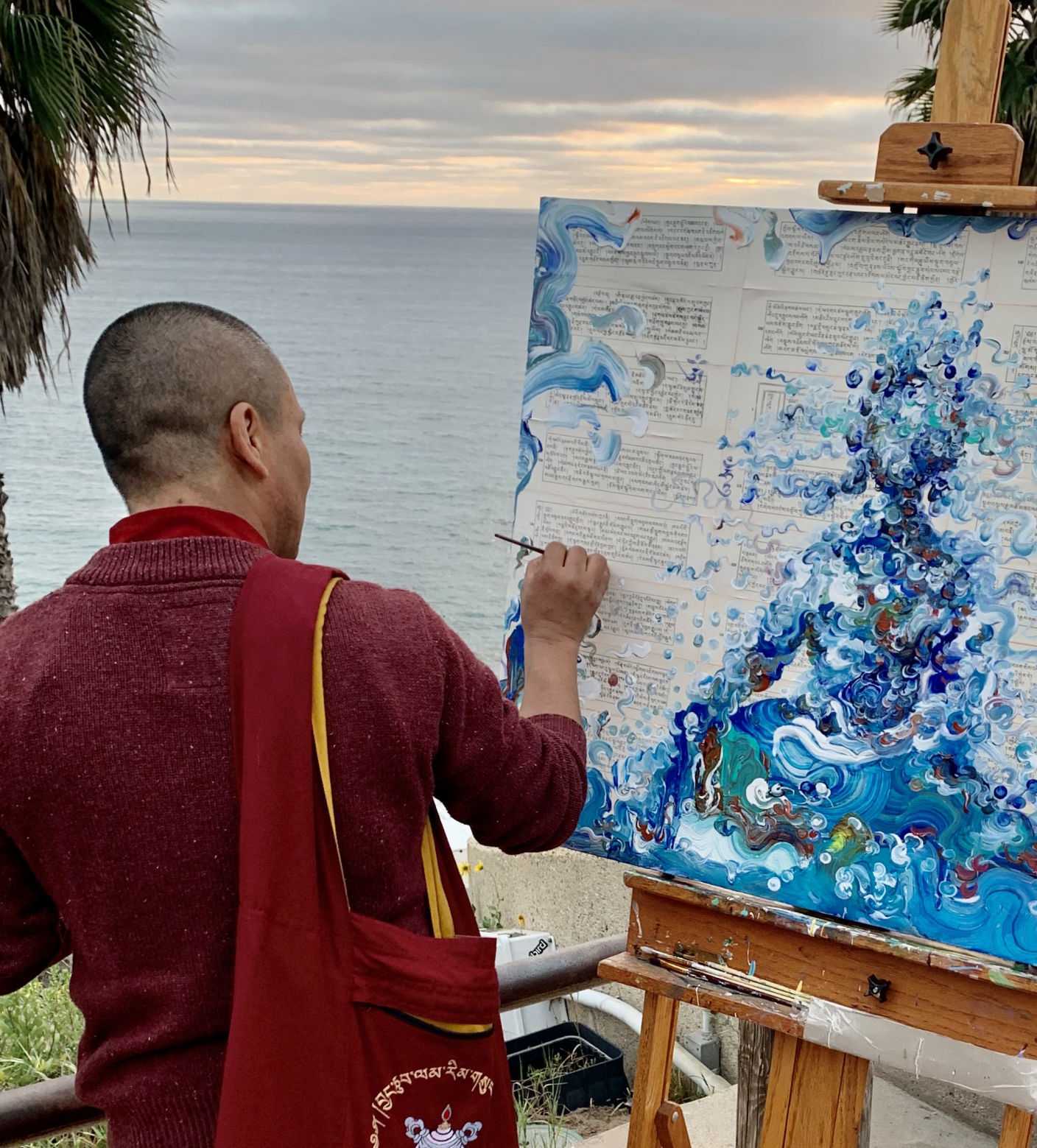 Tashi’s life since his 4 years, until his 18, was spent in a Tibetan School in India, where he was ordained as a Buddhist practitioner been intensively taught Buddha’s doctrines and philosophy, besides Art classes. From his 19 to 21 years, he was studying at Monastic environments, working as a painter at HH 14th Dalai Lama’s private residence. He also painted along with other Tibetan Thangka Painters at the monastery of Tai Situ Rinpoche; until now he is dedicated to the painting of Buddhas and Bodhisattvas. Tashi recalls his mother’s family story that his grandpa, was going once a week into trans and into another dimension, in order to serve those beings who were lost in “Bardo” - He was always telling Tashi when he was a kid, “one day you will be a Lhabri (one who paints gods).

Tashi’s monastic kind of life, ended at his 25 when he came to the West; where he became a contemporary Tibetan Artist. Although he blends the traditional with the modern, his paintings still teach enlightenment and the path to Buddhahood . They are filled with magical tales, colorful imagery, presenting valuable insight into the living quality of Tibetan Buddhism . Always fascinated to make recitations, being so creative at his “Tibetan Mantra Lounge” something which, according to tradition, is not allowed to be performed by a non monk. But Tashi did perform it, meditating along with his audience, viewers and Art lovers, finding in this way the calmness of their inner self. And he travels to the four continents, reciting Tibetan mantras along with his live painting performances. 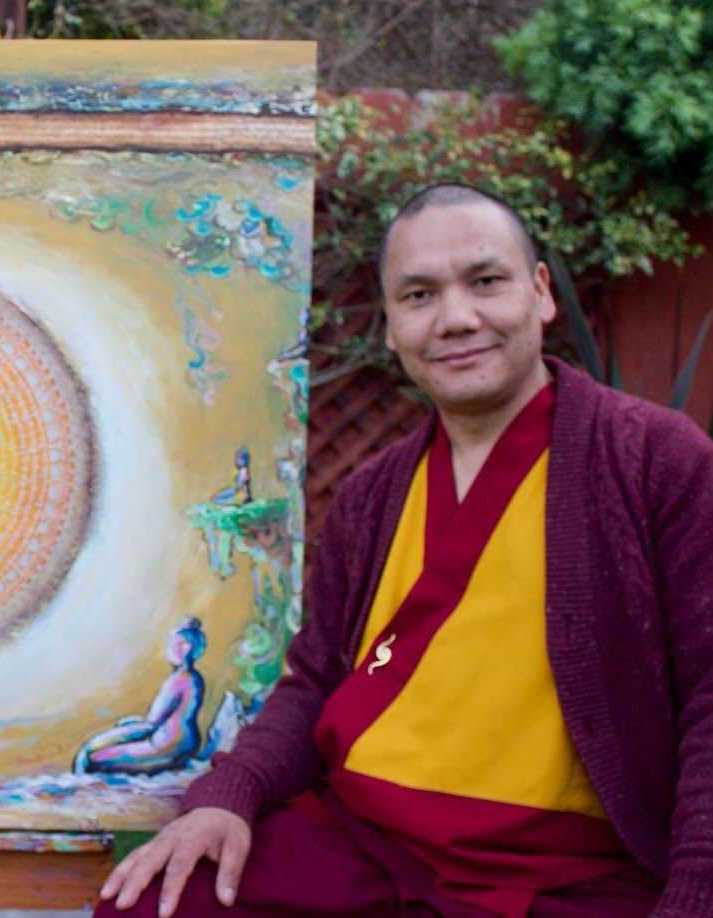 Having tasted all aspects of life, Tashi is now conscious of his decision, to dedicate himself in the monkhood, being engaged in Buddhism yet transmitting to the world his artistic activities: painting Buddhas and Boddhisatvas, giving live painting performances, Mandala festivals, Tibetan Mantra Lounges, benefiting all sentient beings through the purpose of art as a communication means with the higher realms. Marking at the same time the unique ethnic cultural Tibetan art and confirming the dominant tropes of Tibetan Buddhism in the West, where the practice in Buddhism is part of Tibet’s cultural heritage and asset.
Tashi has now become a Tibetan Buddhist Monk due to his strong belief that this is a unique way to walk on this path as an Artist, along with all he is willing to offer through his Art; in order to deepen people’s understanding and help them realize their merits and virtues. For, his paintings touch the mind, the soul, the consciousness. He talks about his depictions to the world and explains his Artworks with reference to the Buddha’s teachings and theories. Determined to live a life entirely devoted to the goal to help all sentient beings to overcome their sufferings that inherently exist inside them and cope with their general insecurity of all conditioned phenomena. 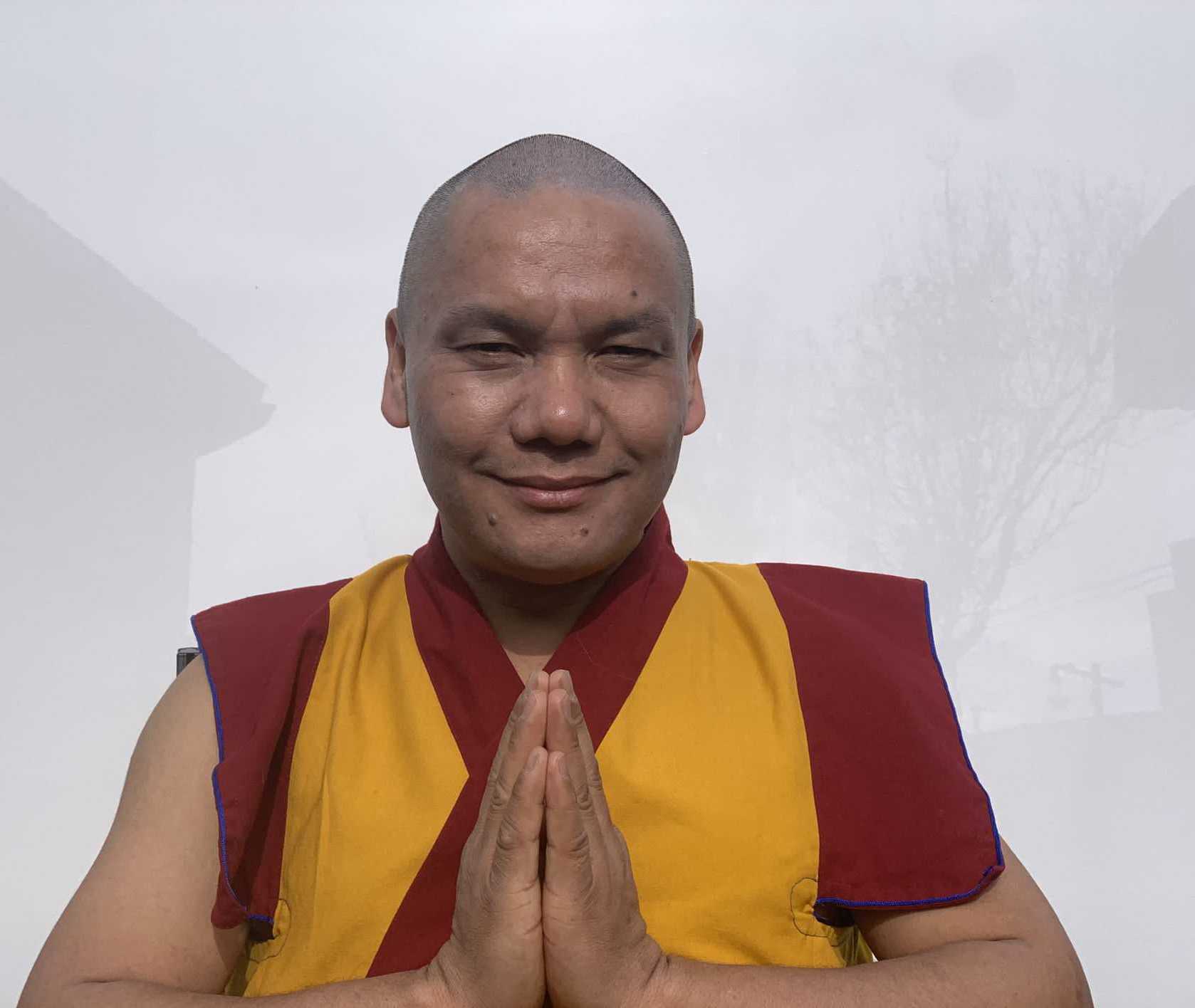 A life that carries a deep responsibility of self and others and lots of sacrifices in order to become a Buddha and get enlightened. A meaningful and worthwhile way for Tashi to spend his life being of benefit to his environment and talk about the preservation of the Tibetan Art and Culture into the world. Hence, his Museum of Contemporary Tibetan Art, in Emmen, The Netherlands. A place where West meets East; where his Live Painting Performances empower his paintings and transform them into a true embodiment of the Buddhas and Bodhisattvas; where the traditions, rituals, philosophical view draw inspirations and here is when Artist’s mind clicks, devoted to compassion and endless services to others.
Text by Leela Skitsa


Tibetan mantra lounge - jamming and meditating for love and world peace from the Museum of Contemporary Tibetan Art Emmen, the Netherlands.

2016 Sep 22 : Tashi Norbu celebrates the successful installation of the Silver Buddha at the National Museum (Tropen) in The Netherlands, Amsterdam, as the e-mail sent by museum's coordinator says: " ... the opening of the exhibition went exceedingly well yesterday, not least due to the marvellous presence of Be the Flower, Not the Bee." 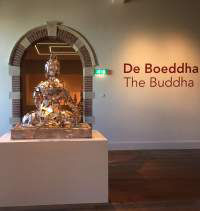 Messages across the Globe 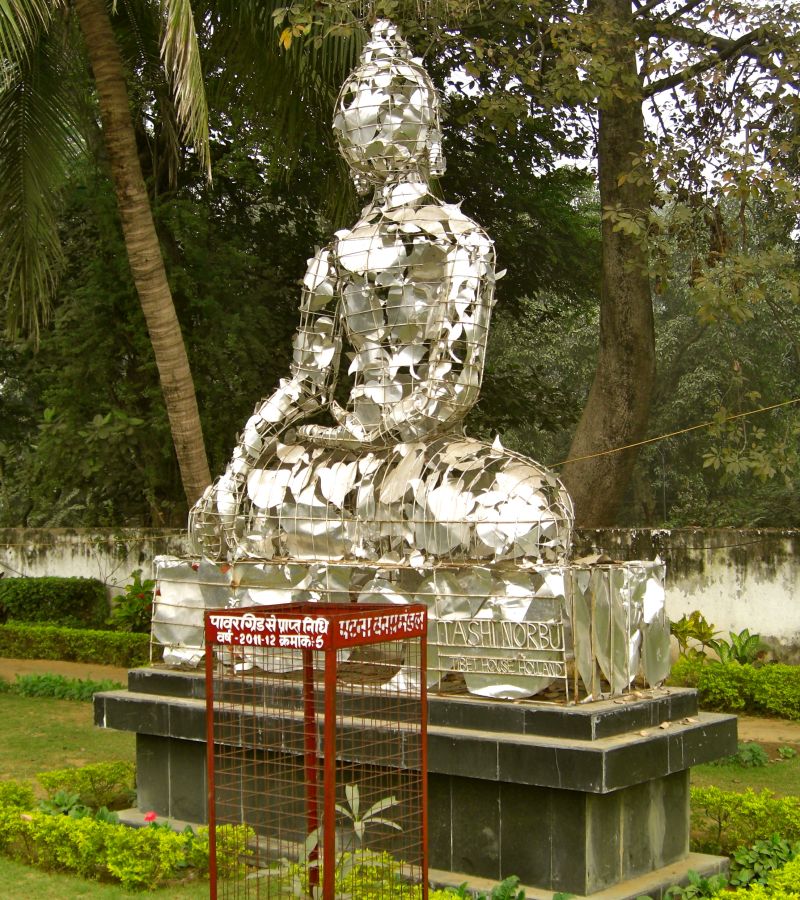 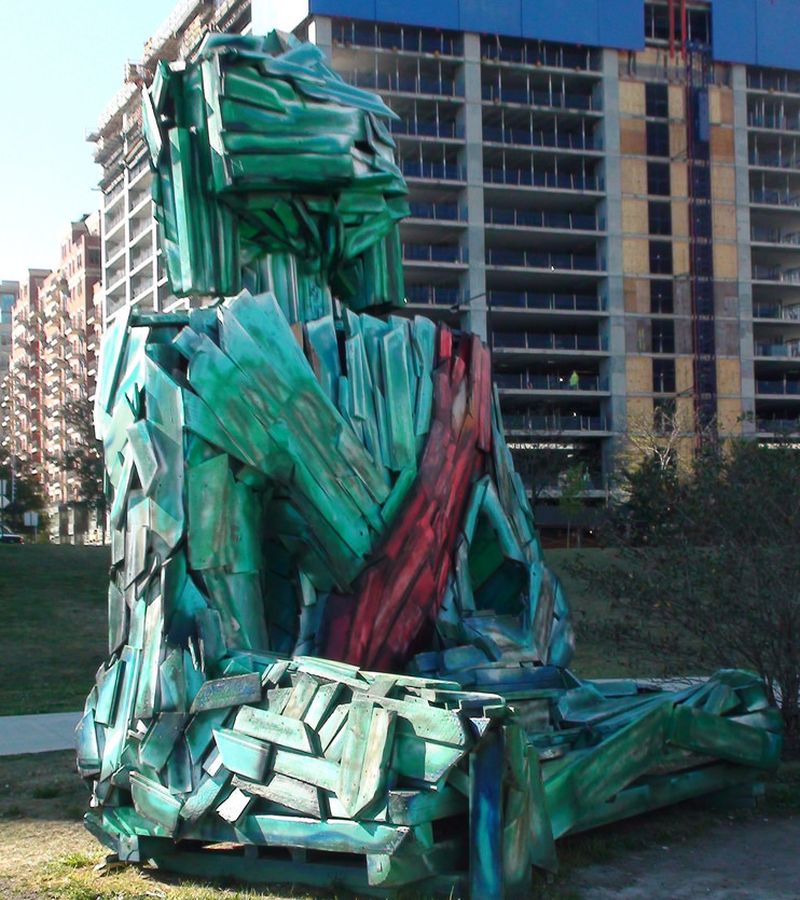 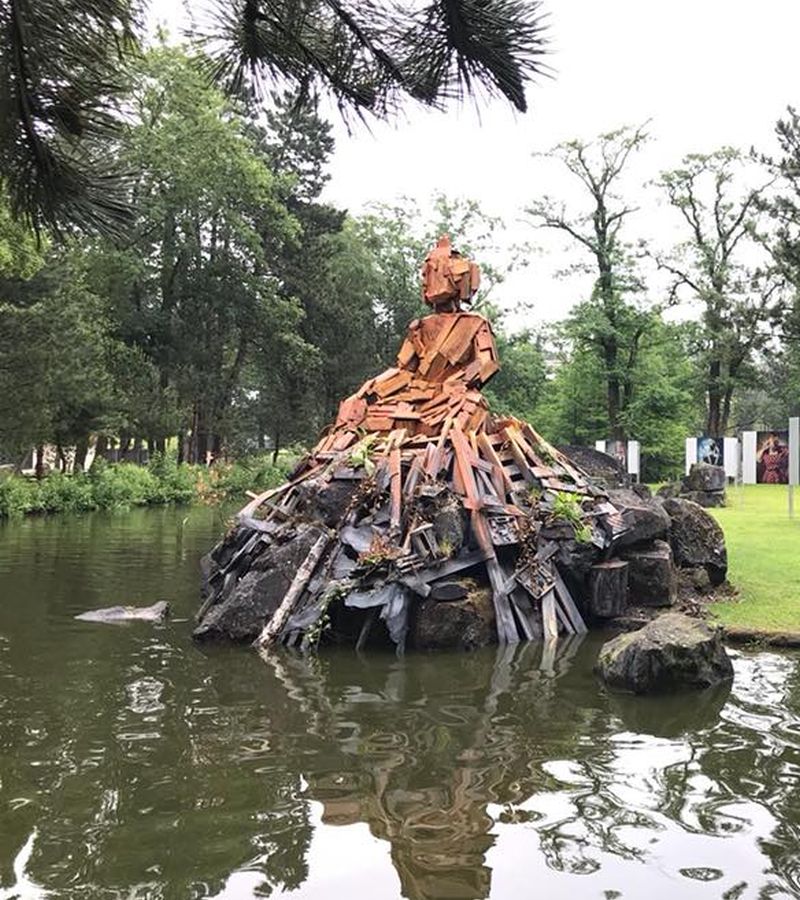 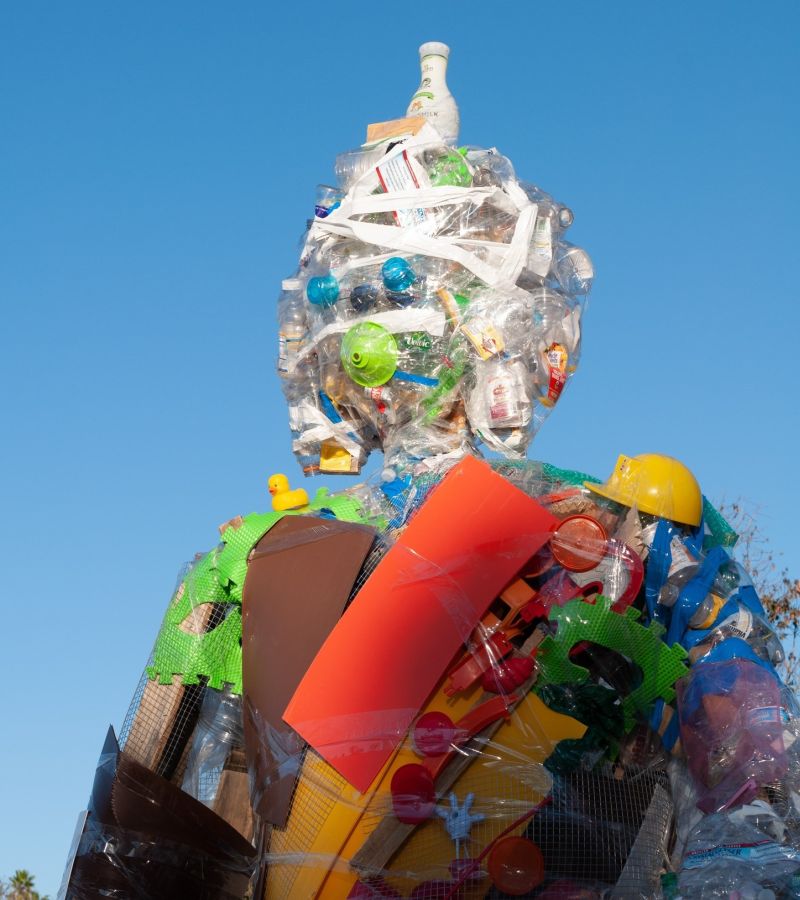 Tashi Norbu sends messages across the Globe about environmental awareness with his sculptures.
The Artist’s “Urban Buddha” Sculptures are Artworks which send message to the world, that is now more important than ever. Four Sculptures which not only practice what they preach, but they are social works in the sense of peace, benevolent acts, expanding cultural awareness through Art. A way for the Artist to draw attention to environmental awareness across the globe. The artworks are created in different countries, collaboratively by locals. Symbolizing in this way Artist’s aim, nations and people to be coming together in order to work for a better future.

Bodghaya/Bihar India, Urban Buddha 2011 made out of waste iron 6x5 m. The statue belongs to the collection of Bihar State and the Gandhi Museum. It is made out of waste iron, welded iron rods, aluminum sheets and iron threads of 5x6 m sending a message of recycling metals so that we may preserve natural resources, requiring less energy, emitting less carbon dioxide and other harmful gasses in our life.

Chicago/Grand Park U.S. Urban Buddha 2016 made out of recycled wood 6x5 m. It is comprised of about 3,500 pounds of reclaimed/recycled wood. It sends a message about the rampant made of recycled wood and makes a statement about deforestation such as from palm oil production, or the cattle ranching in the Amazon rainforest. This sculpture 6x5m is painted in bright turquois and red and was inscribed with Buddhist mantras.

Emmen/Rensenpark the Netherlands Urban Buddha 2018 made out or reclaimed wood 4x4 m. The Artist participated in this way in the project “Emmen goes Eco”. A Sculpture made of reclaimed wood, and wasted objects. It is situated in a peaceful environment among the nature, thus symbolizing peace and tranquility. It raises awareness of ecology and global warming, happening nowadays, around the world. A message about harmful environmental issues.

Encinitas,Sandiego/California Urban Buddha 2018 A Sculpture 3x4 m., entirely of plastic waste, reclaimed from the ocean. The locals and all, call it “plastic soup”. It is created using all kind of plastic collected from the Pacific. It is a message and physical example of why it is necessary to change and learn about the use and dispose of plastic in the world of today. It is a reminder that all plastic thrown, eventually find their own way into the environment.

A great ad from the University of Wyoming Art Museum where the Artist showed the many forms of his Art; showing appreciation on Tashi's Artistic activities, suggesting the Tibetan Art and Culture as a unique expression of Art in the world. This advertisement will be in the university magazine which goes out to Donors and Alumni.
Tashi Norbu’s Art created during his live painting performance is now exposed at the Wyoming Art Museum through July 2019. It will be included at the permanent Art collection of the Museum. 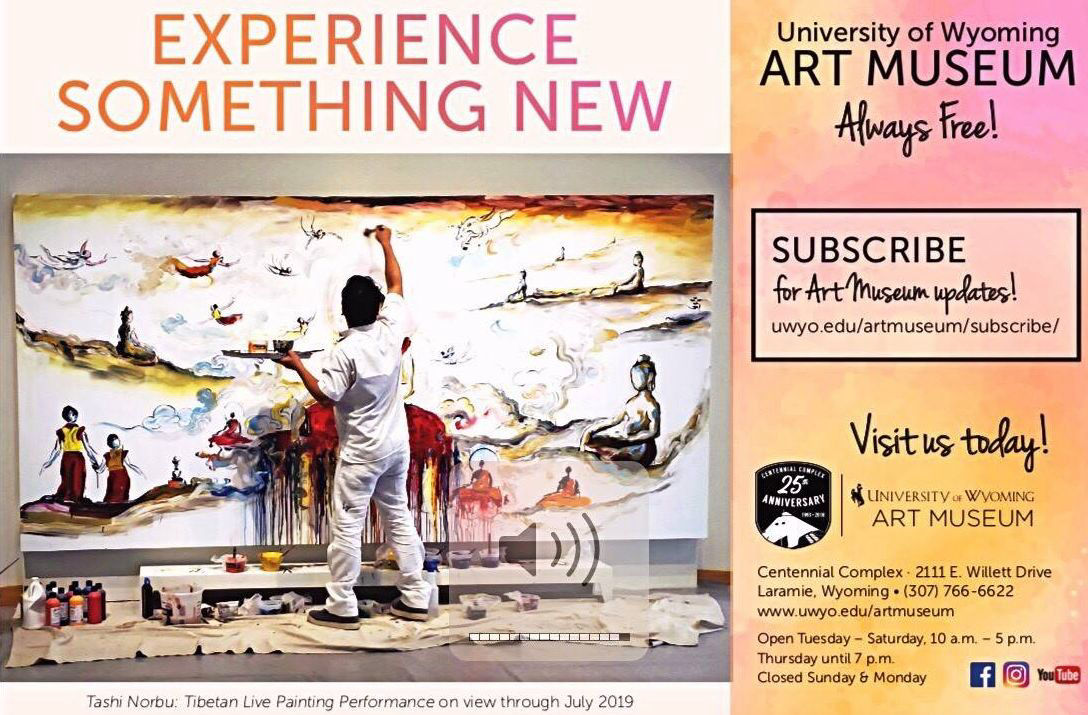 The Art of Tashi Norbu shows the fundamentals/basics of his background -Tibet and Buddhism- combined with strong influences from western Art forms, western ideas and modern time icons.